The SCALA Freakshow Carnivale opened today and Zibska has a bunch of themed and eccentric new releases for you! The 'Galliard' corset/dress set includes colour HUD with 8 colours for the corset and the spheres. The corset comes in 5 standard sizes and black bottoms are also included in 6 fitted mesh sizes. Upper and lower spheres dress parts are resizeable and there is also a headpiece included (not shown below). Also, there is a guys version of this outfit too! The event runs until 13th Nov. 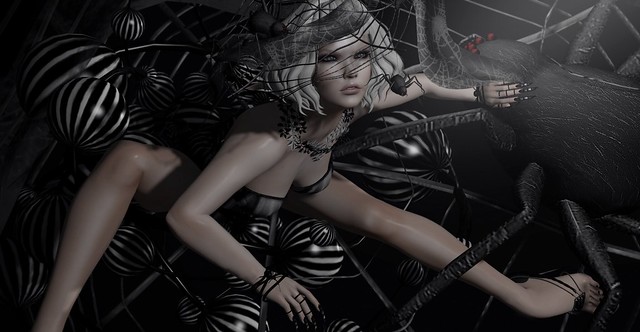 Zibska is also currently taking part in Shiny Shabby, where you'll find this pretty necklace. Again, a colour HUD is included which allows for change of 3 sections independently from another.

This incredibly creepy but fantastically stylish and seasonal headpiece is by Astralia and can be found at the current round of The Liaison Collaborative. It includes a colour HUD to allow change of the web between black, silver and gold, as well as offering 3 different gem colour options. It's completely re-sizeable via a script.

The skin applier I'm wearing today is by Glam Affair for Catwa mesh heads and is called 'Mina'. This is a gacha at The Epiphany, which includes 12 commons in various skin tones and makeups, as well as 2 rares. This applier has been designed specifically for Catwa Bibi mesh head, so be sure to demo if you are looking to wear with another! Here is shown with Catwa Destiny.

The pose is one from the new 7 Creeps collection by Roquai, released at Roquai mainstore. The pack includes 7 poses. There are 5 singles (2 with extra version) plus 1 couple pose (= 9 singles in total). The couple pose includes a dual pose ball set and also the separate animations to use solo if you prefer!
There is a discount of 35% until 30th October so hurry to grab these awesome seasonal artistic poses at reduced price!

The big spider and web background is the Astralia headpiece, attached and increased considerably in size! 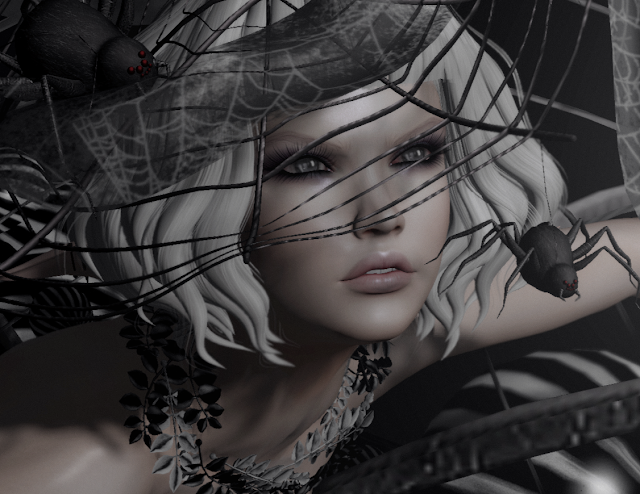