hey girls! Late night yoga workout of sorts, but doin' it chic - And pink!
The sexy bodysuit is by [The Forge] and can be found at Kustom9 in 6 different colours. It's Maitreya fit! 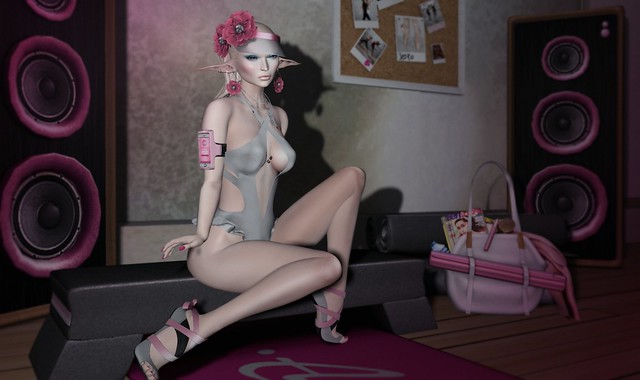 The yoga socks, arm phone and earphones (worn around neck) are all by Astralia too! The yoga set can be purchased from Collabor88 - hurry, there is just a week left of the current round!
Items include colour HUDs to allow changes of various parts.

All of the decor is part of Astralia's 'Fame' gacha (now at mainstore) apart from the Yoga back and that's by =Zenith=.

I do love Glam Affair's Polar-toned skins and 'Susan' Polar is the exclusive points item for The Epiphany. Redeem 25 points worth of unwanted gacha to snag yourself this pretty skin applier for Lelutka in 4 different make-up versions.

As We Dream And Dream Again 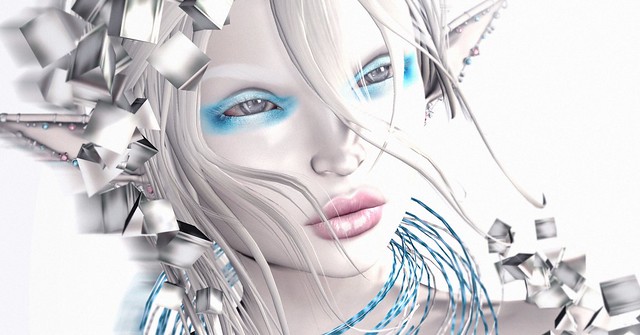 The elf ears are new by Swallow and can also be found at Shiny Shabby. They include multiple piercings and a HUD that enables your to change colour of the metals and gems. There are a bunch of preset skin tones and they are tintable to get your perfect match!

We Are Hunters, We Are Prey

Two of my most fave things ever are new releases at current events!

The 'Against All Odds' gacha by .Shi x Messiah at The Epiphany has this very yummy headpiece and nosechain as the single rare item. It includes colour HUD for the headwrap, hair with all .Shi standard colour HUD packs for the hair and a detachable silver nosechain. It's unisex, resizeable and superchic!
The common items in the gacha are plain headwraps in single colours.

The sexy harness is by Gabriel at Memento Mori and is available for both men and women, in black or white versions. 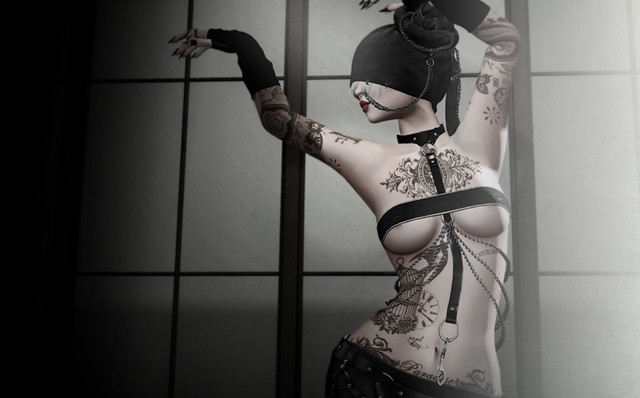 The Astralia 'Like A Butterfly' headphones with colour HUD and animated butterfly wings can be found at the current round of The Season's Story! Add a touch of colour to your winter with colour HUD that allows for change of wings, gems and metal!
I totally adore the new 'Hanna' polar skins by Glam Affair at Memento Mori - there are 6 different make ups to choose from and each include 4 brow colours plus no brow option. I'm wearing here with some of the new Glam Affair brows for Lelutka Bento from Uber! 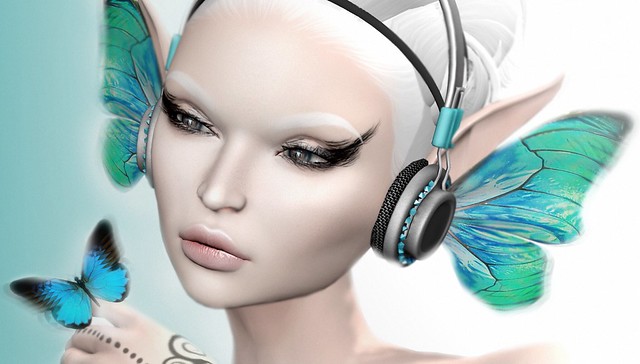 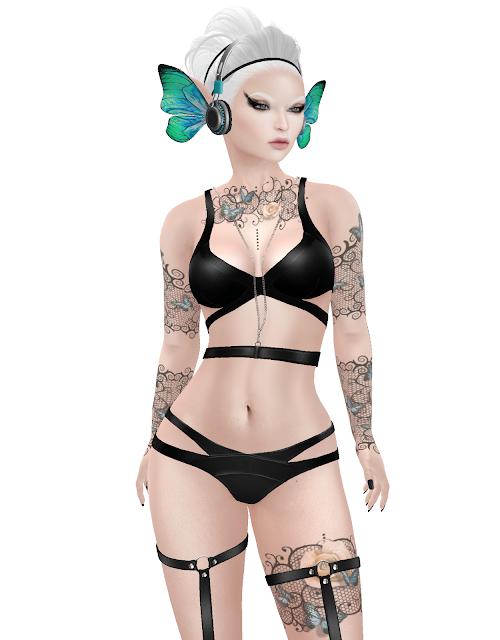 A very wintry round of The Season's Story is with us and *Tentacio* has created a super-cute gacha for the event! The 'Play with Snow' set consists of a rare dress cloak and mittens, common ear headpieces, tails and boots/sock combos that match the dress.
The rare dress comes posed holding the snowball and includes colour HUD that allows customisation for the dress, cloak, mittens and bows. The common ear headpieces and tails come in either black or white versions, the headpieces also including a HUD for the bows. 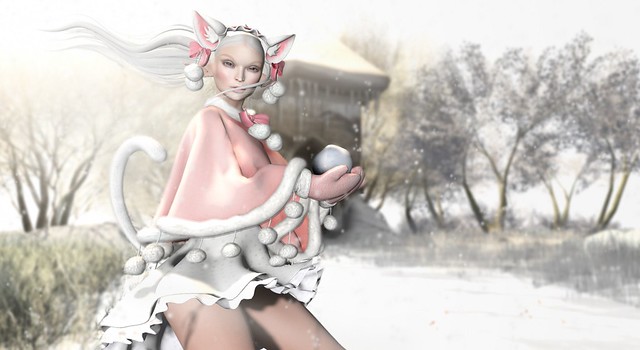 I am loving Tableau Vivant's new hair bases for Lelutka, along with the hair add-ons for them! Especially this side pony, which is great for taking pics!
They can be found at the current round of Collabor88.
There are 4 HUDS available - B&Ws, Blonds, Browns and Reds - each including 6 colours.

Glam Affair has released a new Polar (oh I do love polar \o/) skin applier for Lelutka at the new round of Memento Mori. She's super-pretty and called 'Hanna'. There are 6 make up versions available, each with 4 brow colours and no-brow option. 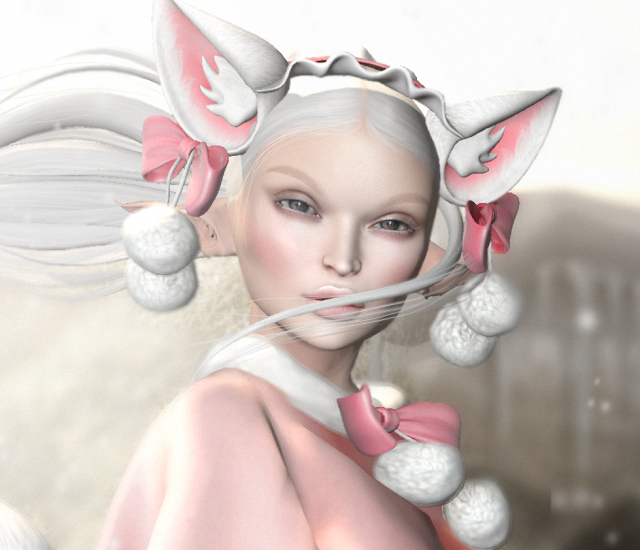 A new round of The Secret Affair opens on Jan 15th and this round is all things deep water and depth... plus anything lurking down in the deep too!
Una has created a metallic 'Coral' set for the occasion, which includes collar and coral nipple coverings. There are gold and silver versions available, each with 7 colour options for the coral. 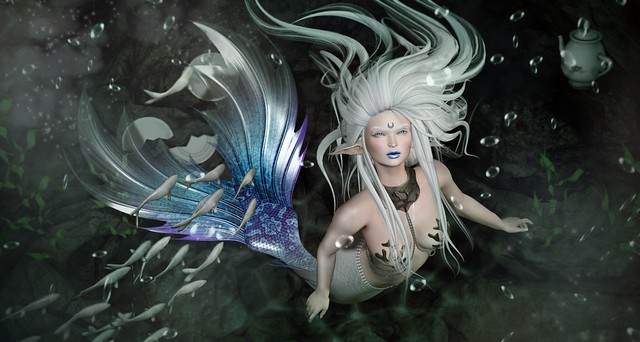 Zibska is releasing some vibrant new eye and lip makeups for The Secret Affair. Each pack includes 20 colours for Lelutka, Omega, TMP and standard tattoo (Nerissa lip also includes Catwa applier).
Jackalope have created the perfect backdrop to any deep water photograph with this Sea Cave. It includes light beams, water animation and all sorts of lost and forgotten things.

We're also going into the last couple of days of The Fantasy Collective's Lootbox round so don't forget to stop by! Tableau Vivant & Glam Affair released a collaboration for the event, which includes this stunning 'Tempest' hair and beautiful light skin for Lelutka Simone mesh head.

Running With The Red Queen

Following the release of Lelutka's Simone Bento, Glam Affair has created lots of new beautiful Lelutka appliers with Simone in mind.
The Project Seven sees the release of 'Serah' in 9 skin tones from Artic to Africa, each including 4 eyebrow colours plus no brow option. To compliment the release of this pretty skin applier, there are also packs of lipsticks available - each including light and dark versions of the chosen colour. 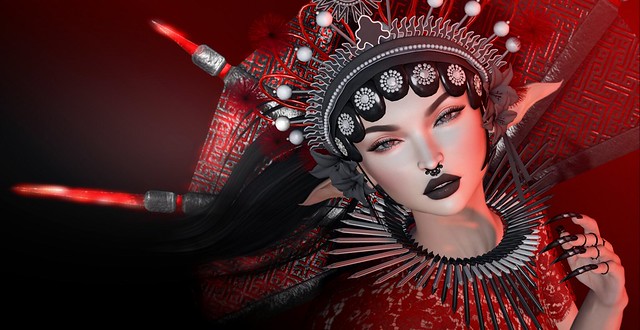 Azoury has released the 'Cho Headwear' at The Chapter Four. This elaborate headpiece is available in four different colour versions and they will be half price for the duration of the event, which runs until 20th Jan.
The collar is by Zibska and can be found at Shiny Shabby. The pack includes the full version, in addition to separate lower, mid and upper sections for ease of styling. A colour HUD is included providing 30 colour options and allowing for each layer to be adjusted independently of  each other.

Simone Bento has been updated to version 2.1 - just wear your 2.0 to receive the update!
Notable points for the update include the addition of a blend slider to the brow layer, tattoo layer will now fully cover eyelids, longer lashes and a few minor bug fixes.

Below are all the new Lelutka Skin appliers by Glam Affair for the release of Simone Bento. Please try demos for use with other Lelutka heads.
All pics below are unedited, use same shape with skin in Asia skin tone, clear of make-up and include the brows that come with the skin applier.
I think Serah and Lucrezia are my personal faves!
**edit** I said clear of makeup, I forgot I had the Lelutka tattoo layer switched on and all pics show the blush that comes with Simone HUD... derp! 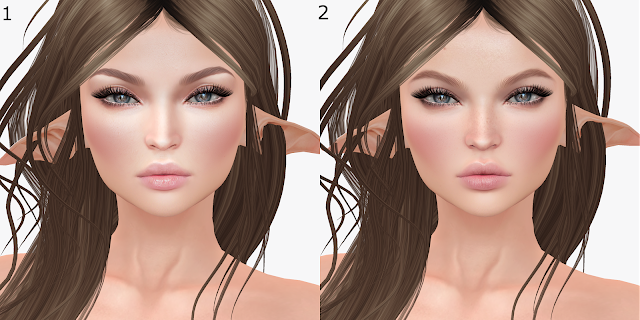 *Tentacio* has released a gacha full of cute floral kawaii-styled goodies at SaNaRae! There are 2 rares in the collection - the sceptre and the thong. The thong rare includes a cute bow on the back and colour hud for the flowers. Commons include tops and harnesses (maitreya experimental fitted size) - each in white, pink and black - as well as headpieces in 4 different colour flowers, chokers in 4 different colour flowers and also a choker hud that allows for change of colour of the main band in the choker.
The cute half moon bindi is a new group gift by Cureless[+] and comes with a colour change hud! 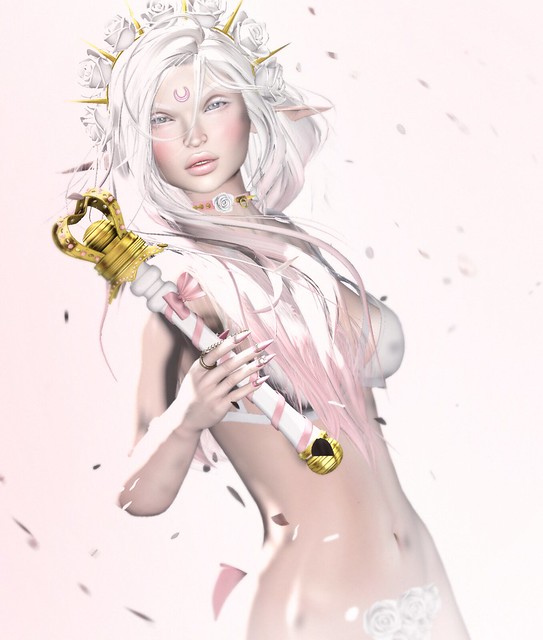 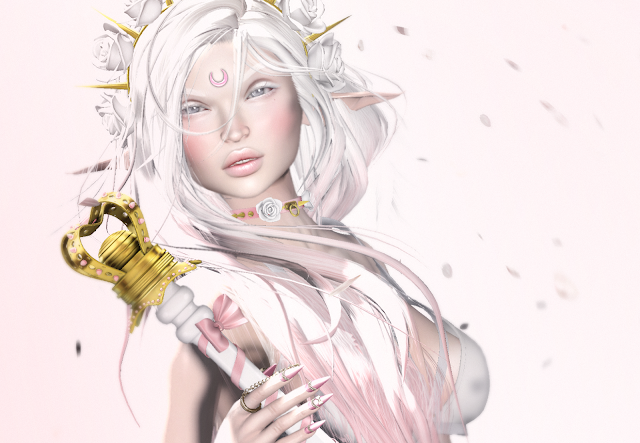 The Landmarks:
*SaNaRae*
Cureless[+]
The Fantasy Collective
Posted by Alisa Perne at Wednesday, January 04, 2017 No comments:

A post to say pretty much that... Happy New Year and a big hellooooo to 2017!
The pic is a very rough, quick edit just cos I got all glammed-up and wanted to do something for the new year! It also shows off a few pieces from the Arcade, which will be closing very, very soon for the Dec round but I'm sure the gacha's will be found in the stores afterwards too ;) 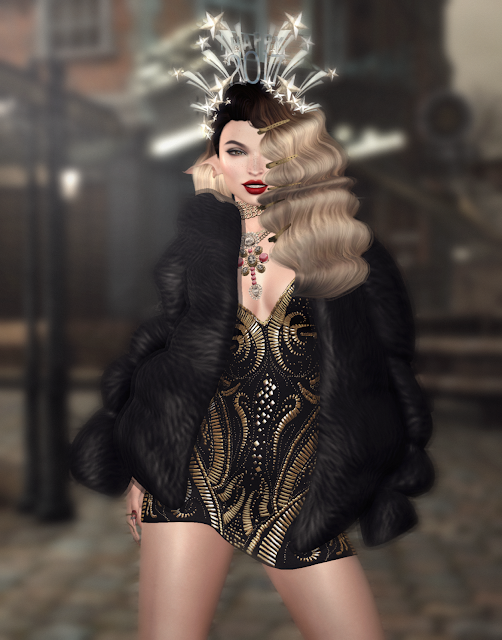 Pose by Del May
Pic taken at St Pete City
Posted by Alisa Perne at Sunday, January 01, 2017 No comments: