Sad November will be running from Nov 1st to Nov 22nd and Azoury has these fabulous Sauvage shoes to play for! The gacha is 89L per play with 4 different upper texture designs - creme, leopard, black and brown - in 3 different base designs. The ones you see pictured are the common 'trunk' and there will also be the rare 'trunk white' and ultra-rare 'driftwood', making 12 different shoes to play for and collect!
These are fitted for Slink mid or Belleza feet. They also need a little extra height, which can easily be achieved by adjusting your hover in edit appearance. I think I have mine at about 55 for these shoes.
I also say a final fairwell to H22O as this gorgeous sim will be disappearing on Halloween, so do be sure to stop by before its gone!
As always, check my Flickr for bigger version of pic! 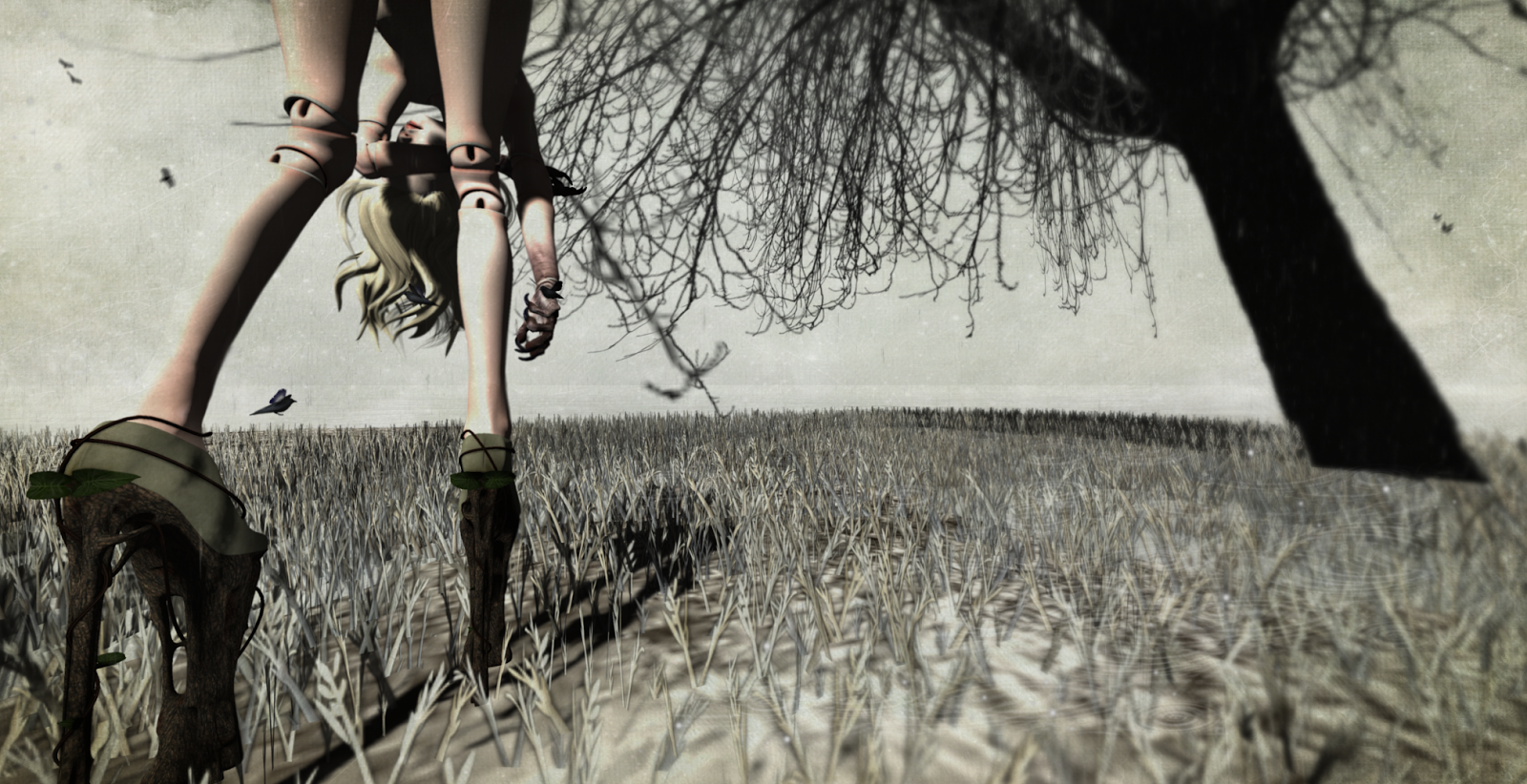 Pose by Del May - "Hopeless"

hello ladies!
New release by DRBC just in time for Halloween! 'The Craft' dress is available in this 'Samhain' colour-hud-fatpack for a special seasonal promo price of just 300L! That's 8 separate prints to choose from, including the 4 shown below. The pack includes a fitted mesh option as well as standard sizes.

8f8 has new horns available! These pretty things come in 3 variations - Steel (as shown), Stone & Glass. The little details on them are exquisite! 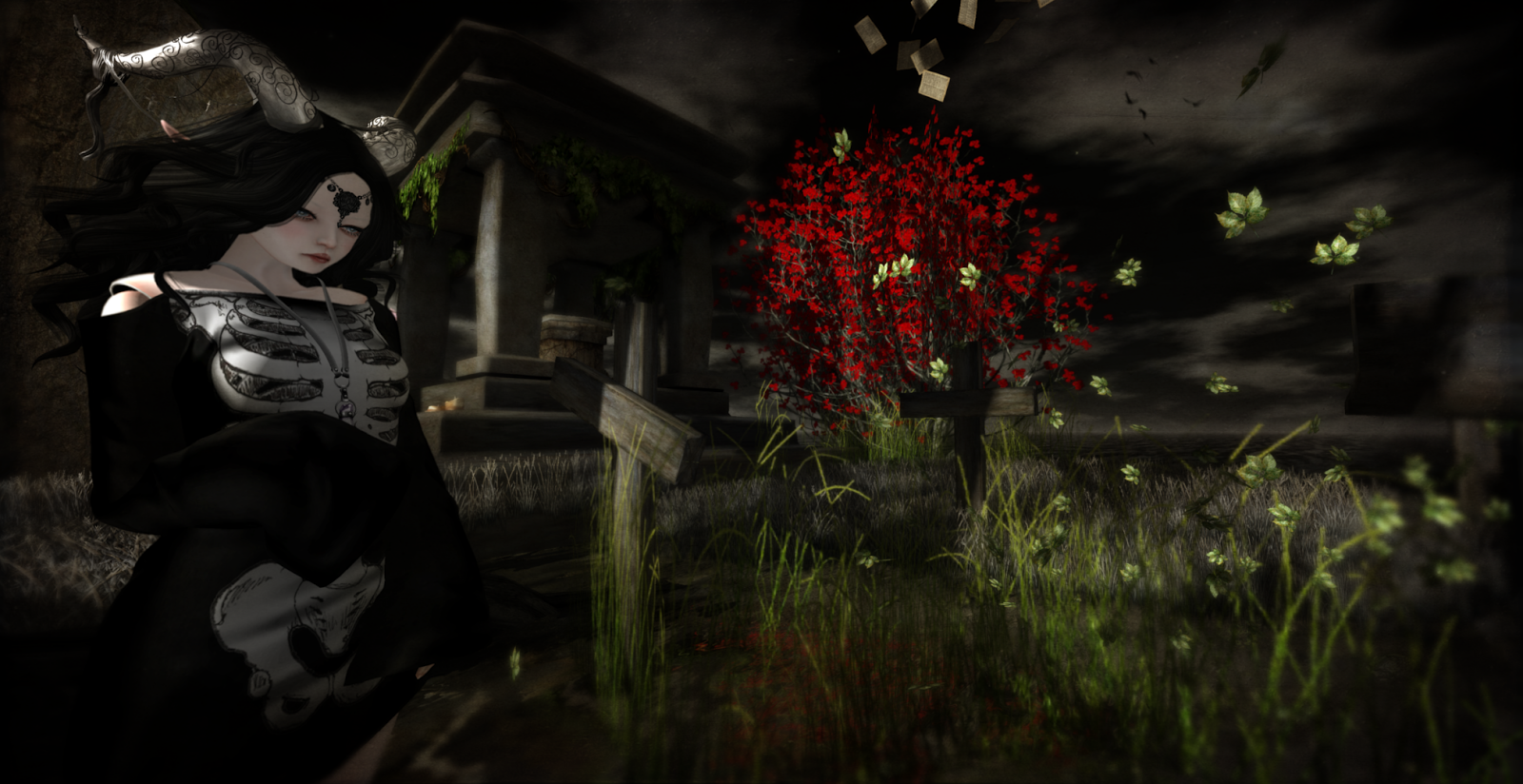 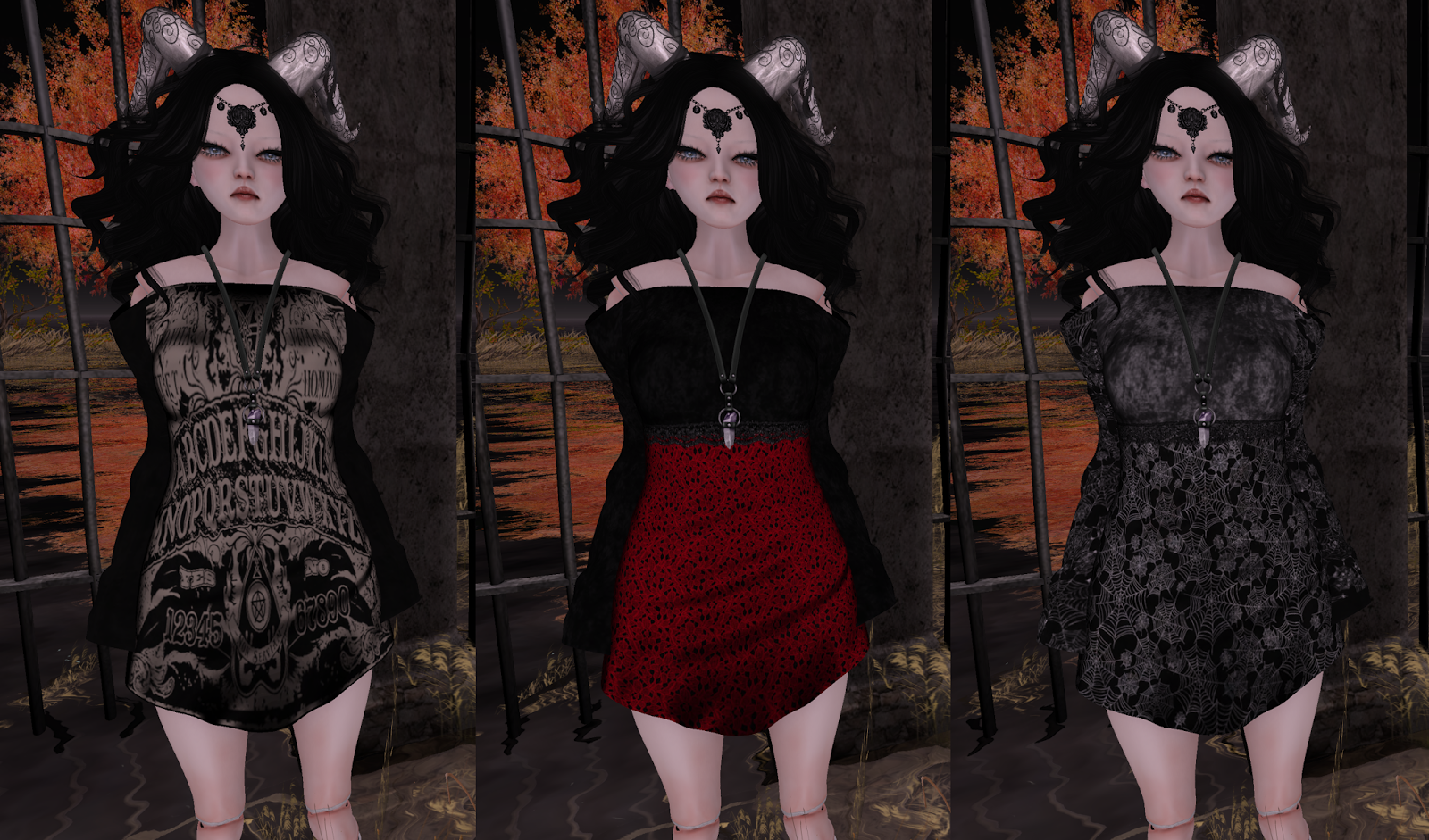 Many thanks to Duchess Flux for use of her lovely sim and cemetery set up!
The props you see in the top pic are by Roawenwood:
{RW} Mausoleum -:- Annabel Lee
{RW} Graveyard Crosses
{RW} Red Leafed Bush Be Scared... Very Scared
I'm in pink! Yes it's true, but as it's coming up to Halloween I thought I'd get spooky and have a bit of fun.
This first look was inspired by the pretty new Group Gift by Glam Affair and these fabulous new shoes by Azoury. The shoes do come in another 5 colours besides this 'lipstick' version. They are part of the MixMatch After 6 Days event and can be purchased in the mainstore at a 50% discount with the HUD that will come inclusive with the second pair of brand new shoes by Azoury (see further down post!). Both pairs of shoes can be worn with SLink or Belleza feet.
Today's dress is by *Tentacio* and can be found in different colours at Kustom 9. Oh, and I slightly 'unprettied' the skin with the vamp lips by Czarny Kanerak for this month's Horror Haute. There are 3 versions included (full, makeup only and blood only). 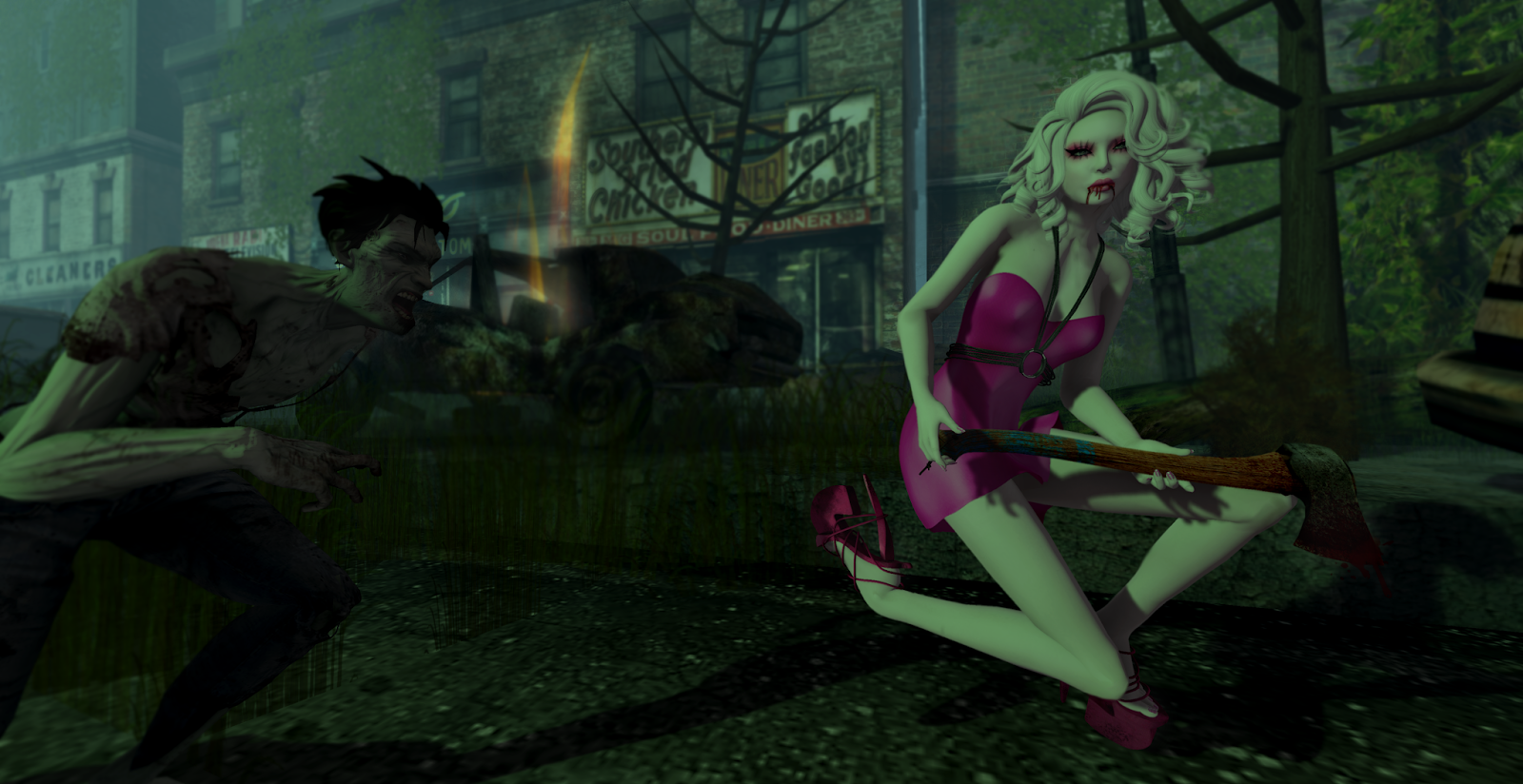 Poses: "Taxi" by Del May (the Zombie!) & "Tati" by Bauhaus Movement
Pic taken at Fateful Gardens

It's been a few days since I posted and the MixMatch event has given me cause to double up, with 2 looks in today's post. And I'm back to a more 'normal' colour scheme for me :P
The 'Paper' shoes can be purchased at the MixMatch event location for 289L (they'll be 349L after the event). Paper are available in 3 colours and can be found at the Azoury mainstore.
Pumpkin props in these pics are by .::Pure Poison::. in the TAG gacha event (Cats Pumpkins RARE and W&B Pumpkins). Also used {anc} "raw cotton: melancholy" from The Season's Story and {anc} "comet pillow polar" from previous Arcade.
And because there is no such thing as too much hair... more newness from Truth! Available in the mainstore. 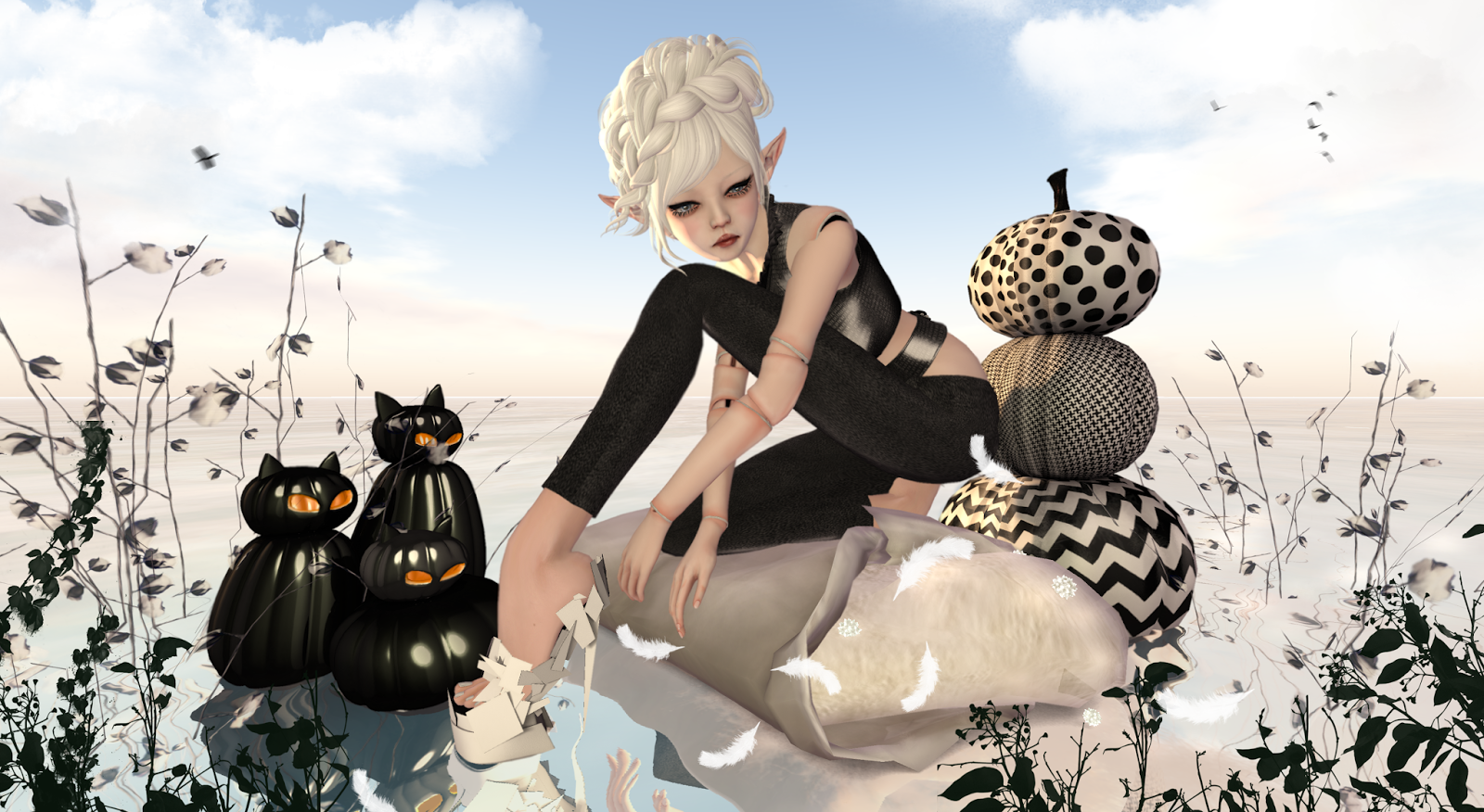 Pose by Del May - "Resigned"

hello peeps!! I'm back to fantasy pics for today's post. Today I have dolly wearing the awesome 'Nima' ensemble by May's Soul at the Mystic Realms Faire. I love this, I really do. It's also great that it's unrigged mesh, making the top and thong easy to adjust for any shape. Available in 8 colours and could easily be used as mix and match with other looks too! But to be honest, I think its quite pretty on its own :)
Also from Mystic Realms Faire, gorgeous new hair by Truth (yes i'm also in love with this!) and this stunning sword by Empyrean Forge. Now, I'm not normally much of a weapons kinda girl. But the detail on this one was pretty I couldn't not have it. It's not scripted, but this I found perfect for me. There are 2 versions included, a sheathed version and an unlinked version so you can have the sword alone. It is mod so if you like to add animations etc, you can! There are 4 colour versions available. 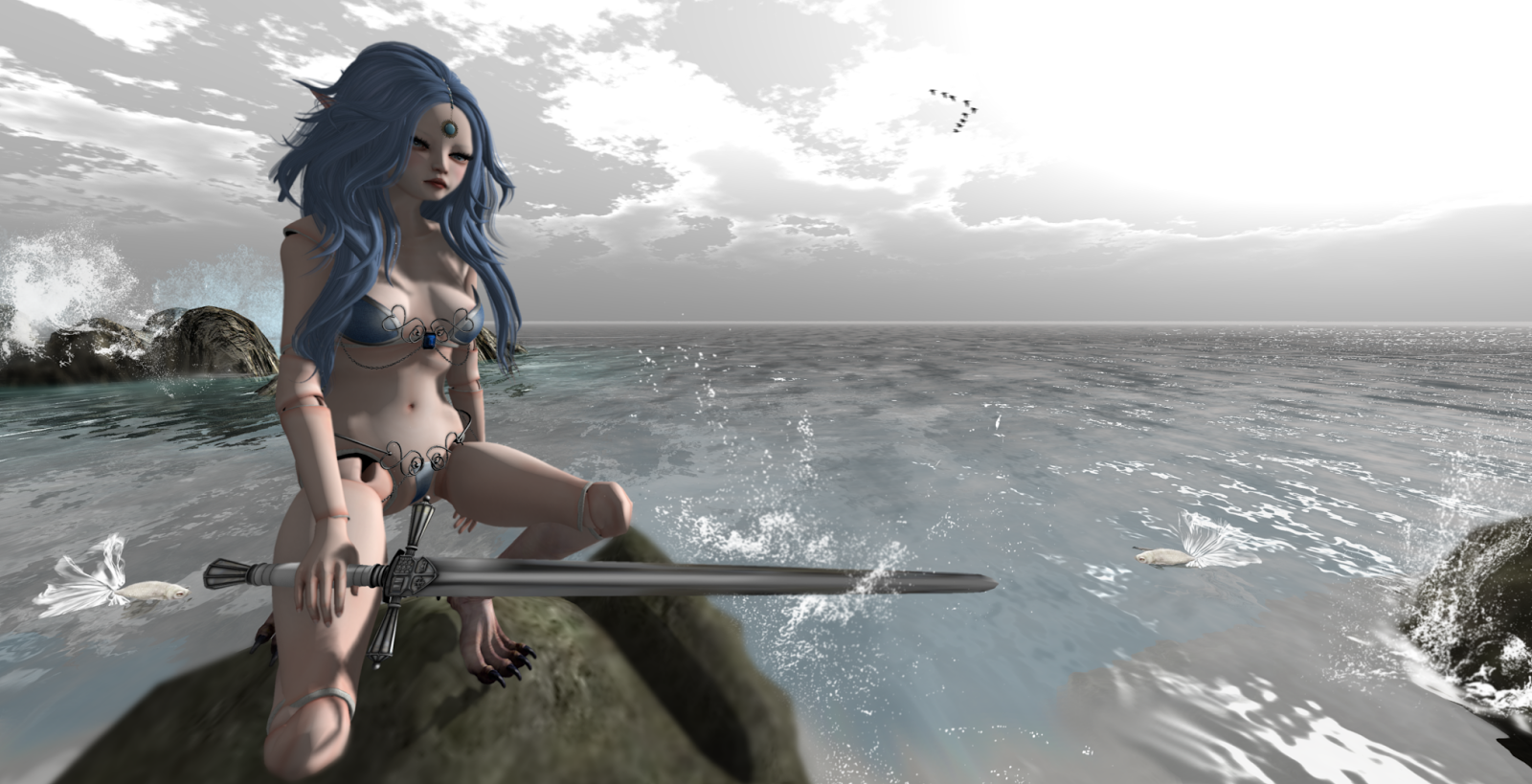 Pose by Del May - "Crouch"
Fish by {anc} "Frilledfish. mistwhite:C"
Pic taken at a private sim

Hello ladies. It seems with the weather turning chilly that I've switched into full on autumn mode now. Thanks to Dead Dollz & Azoury at the Vintage & Cool Fair, I can stay warm and stay classy!
This dress by Dead Dollz includes the fur collar and hand muff, and is available in both black (as shown) and grey.
The shoes are by Azoury and will work with either SLink or Belleza Venus feet. They come in 4 different colours and the detail on them is amazing!
Hope you like the look of the day! As always, bigger versions of pics available on my Flickr. 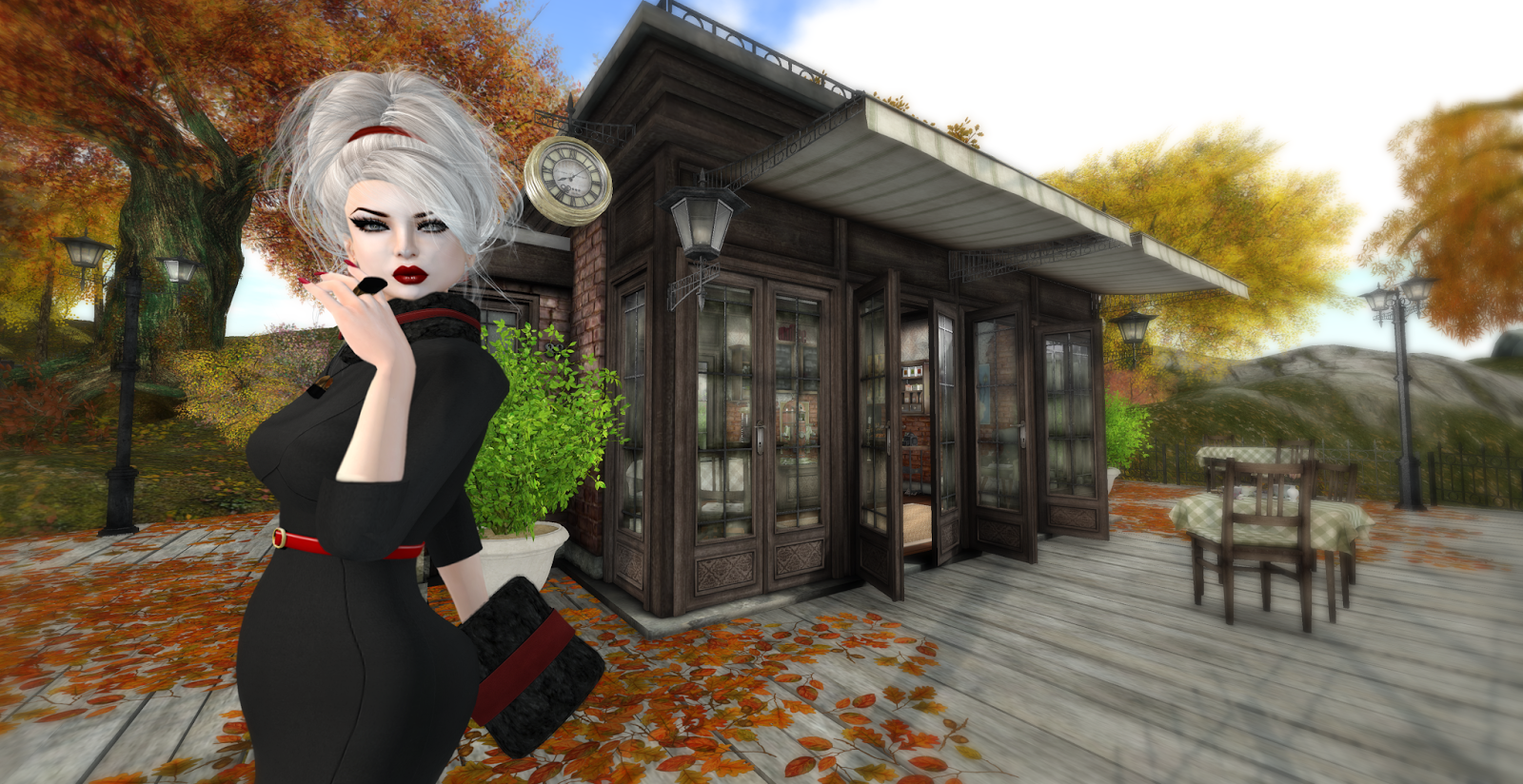 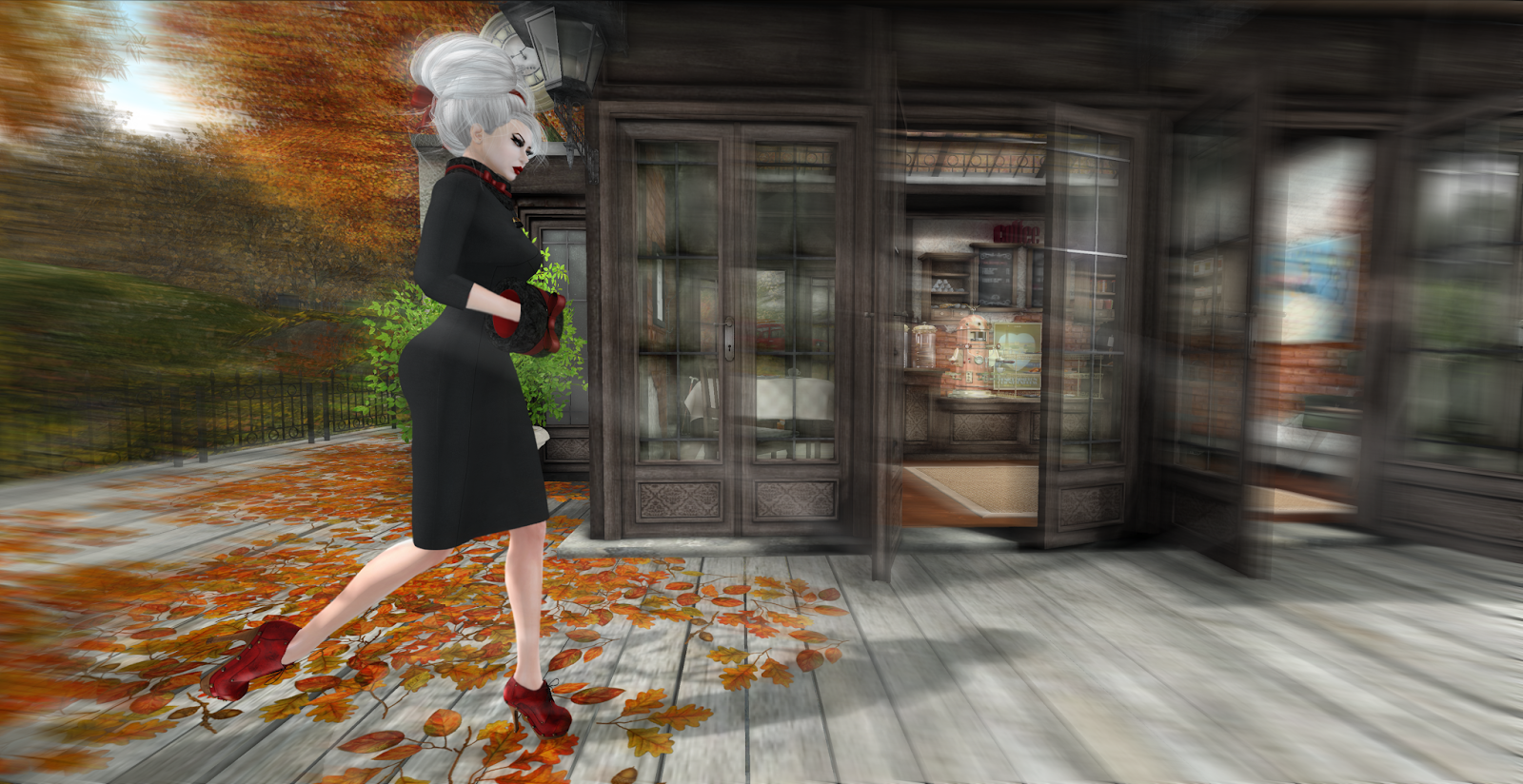 Pose 1 by PosESioN, Pose 2 by Grafica, Pose 3 by Del May, Pose 4 included in bench

Hope you are all having a good weekend!
I'm still sticking with fantasy themes at the moment (with so many good fantasy events currently running it's hard not to!)
.::Pure Poison::. have several new things available at the Mystic Realms Faire, which include this stunning Mhedusa headdress and mask. They have a couple of fantasy/rp outfits at the event too and the Lia costume I'm wearing is available in both brown and black leather.
Hope you like the lotd! 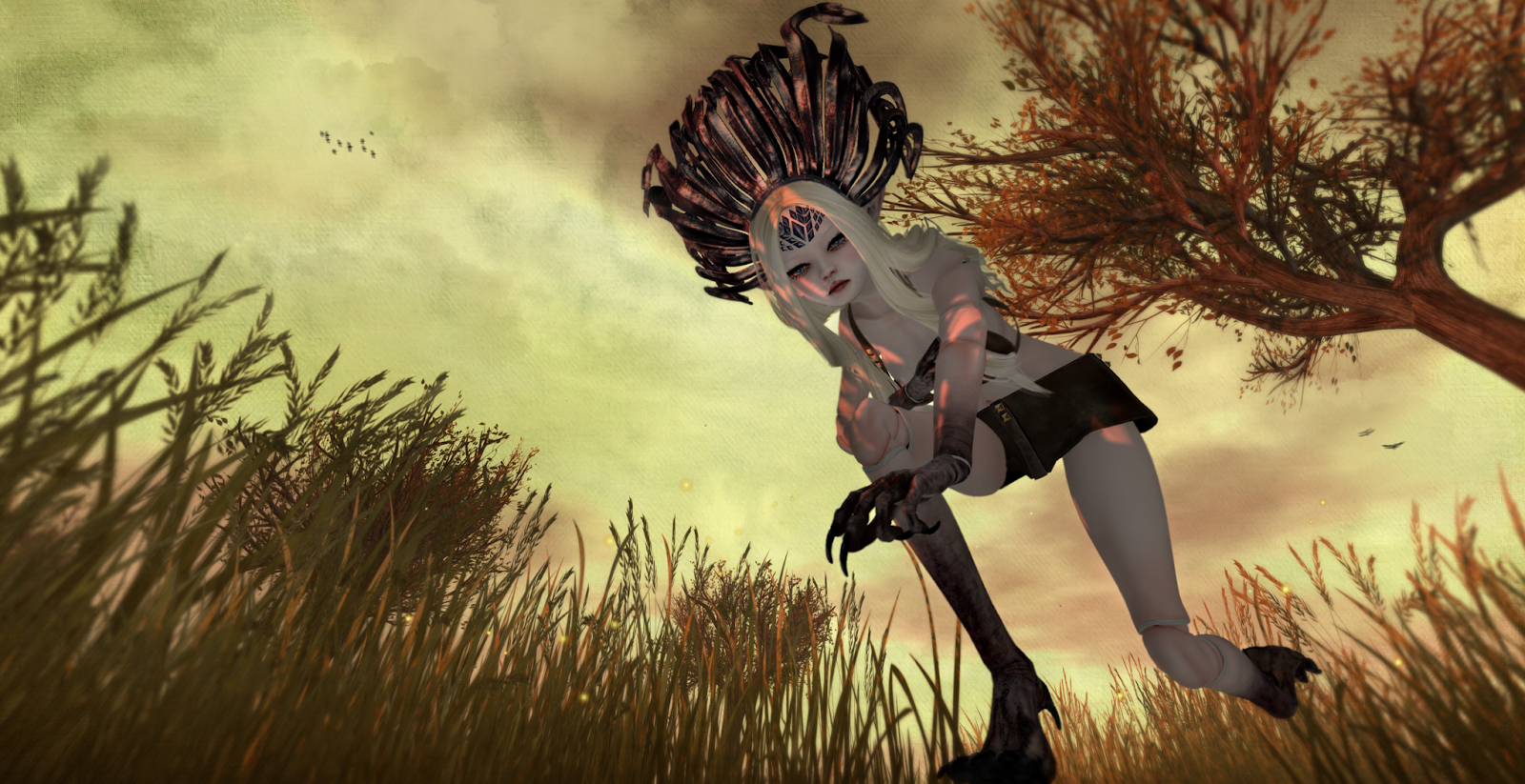 Pose by Del May - "Narcissus"
Pic taken at Black Kite
Posted by Alisa Perne at Saturday, October 18, 2014 No comments:

heya peeps =)
Dolly is all at one with nature today, with a little help from some new Zibska goodies. The hjorir headpiece is new at the Tales of Fantasy event. This can be purchased as the full version, which includes a HUD with 10 colours for the antlers, leaves and cones (which can all be changed separately). The full version also includes the Life contouring make-ups in 11 colours (not shown). Alternatively, you can snag one of 4 single colours that come with the corresponding make-up colour.
The necklace and arm pieces you see are also by Zibska, but these you'll find at the Mystic Realms Faire. A colour hud with 16 colours for the set is included.

The little birds are taken from Zibska Corbin

For the little bit of the sim you can see, I'm at H22O again (I just can't get enough of this place before it goes poof at end of the month!)
Posted by Alisa Perne at Thursday, October 16, 2014 No comments:

hey peeps! Superquick one from me tonight - more rambling tomorrow instead! 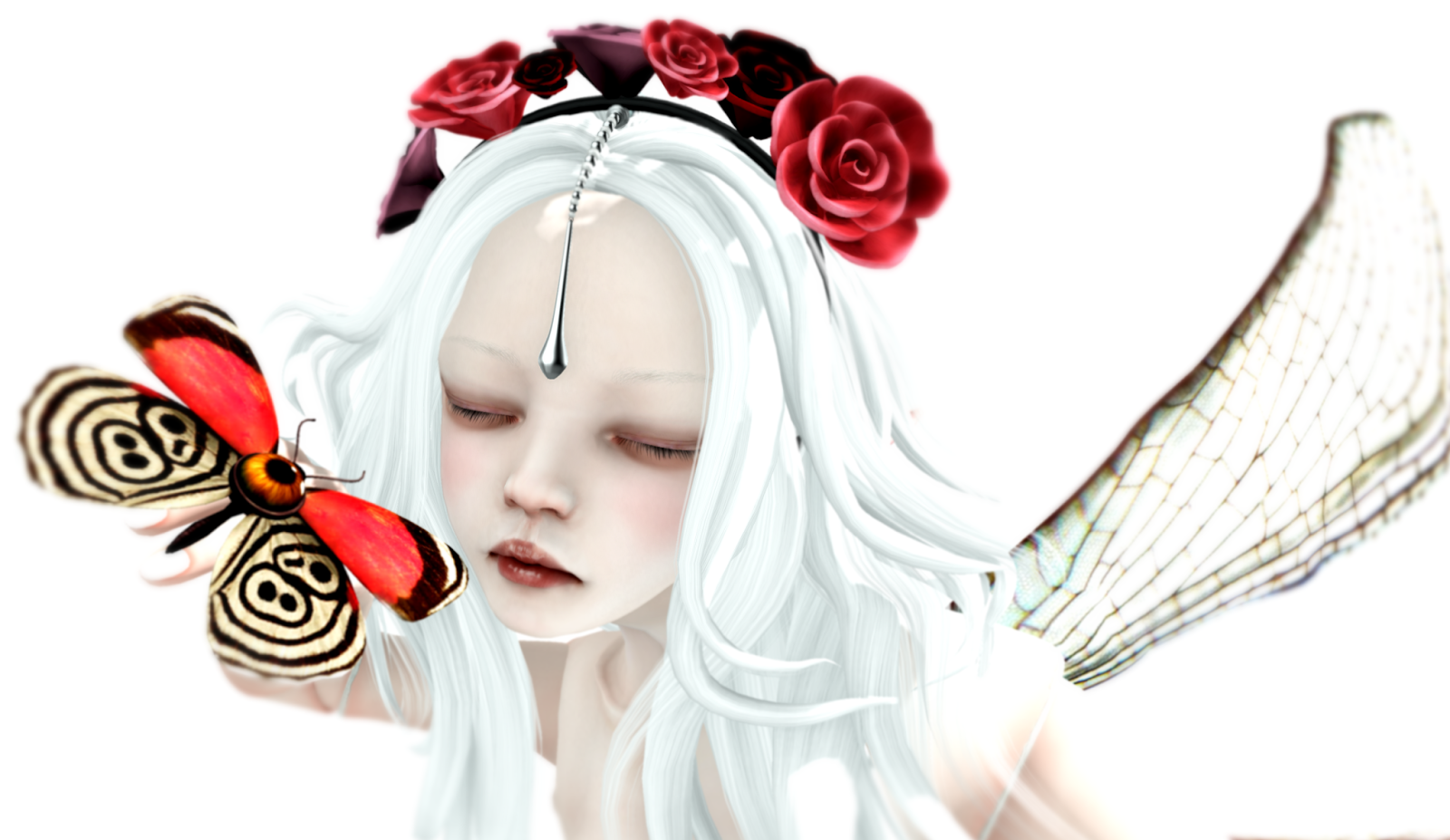 Pose by Del May - "Lip Smudge"

Beauty Is In The Eye Of The Beholder

hey peeps... weekend is over already but finally getting a new post out (seriously where does time go these days?)
Anyway... first things first. Truth has some epic new hair available at the Mystic Realms Fair. 3 new styles and I'm in love with all of them. The hair shown in today's pic is called Thalia and this long curly style comes complete with this pretty crown (it's separate so the hair can also be worn without it!)

If you haven't stopped by Uber this month yet, there are lots of sexy goodies available, including this elegant necklace by Zibska. As with many of Zibska's Jewellery pieces, this can be purchased as the full version with colour-change HUD or as 4 single colours. The full version includes 10 colours for the main and accent sections, and then a further 5 options for the beads.

I picked up these pretty butterflies from +Half-Deer+ at Collabor88. They come in 4 versions as part of a pack including decorative bell jars. 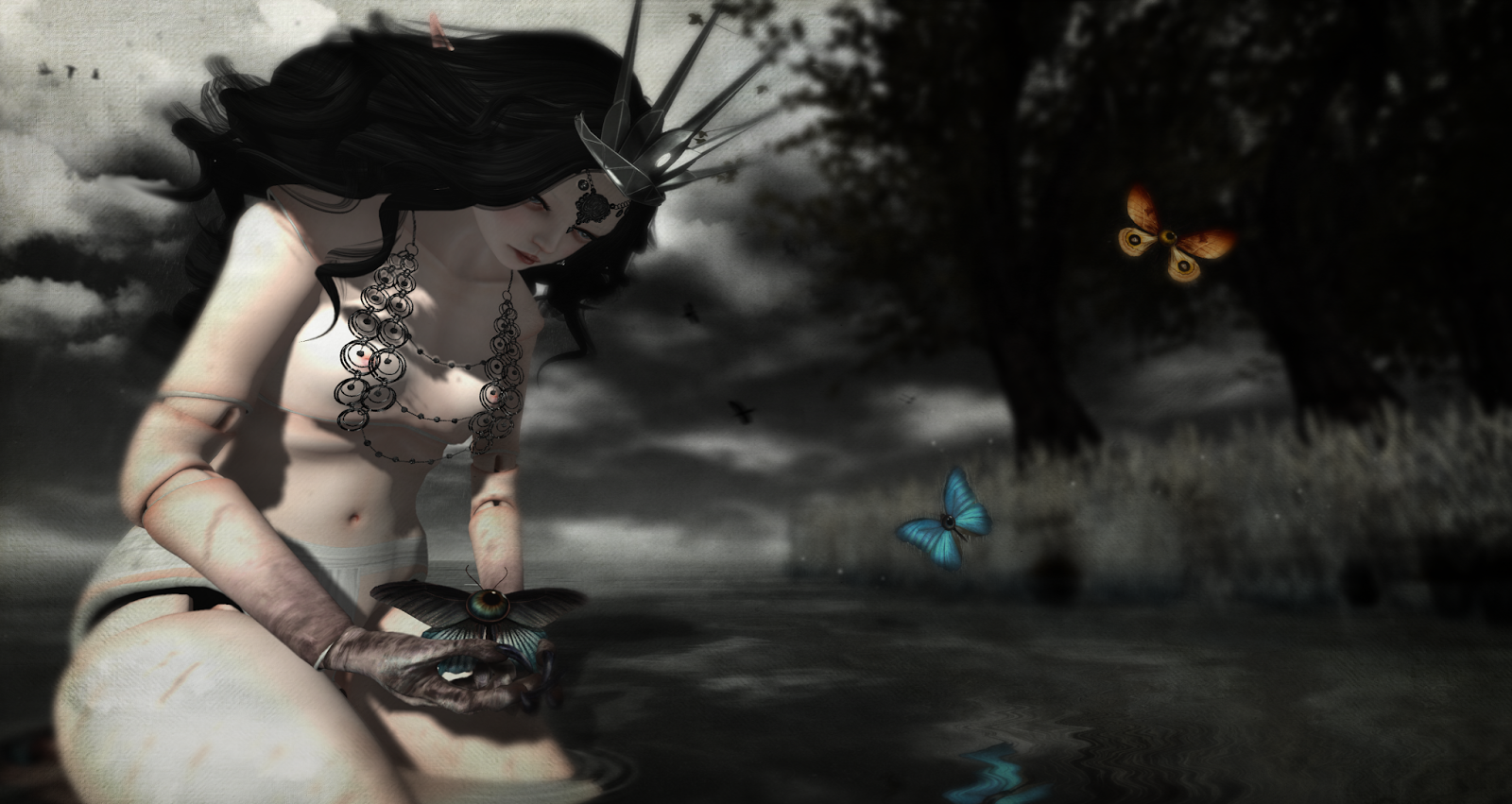 Take a look at the beautiful gacha goodies by [Tia] available at The Gathering. The collection includes some very pretty jewellery such as rings, necklace, earrings, armbands and bracelets. There is also a stunning staff with glowing orb as the ultra rare prize. Get on over there before the 15th!!
I've got back into my Belleza mesh body today and wearing it with this fab metallic mesh bodysuit I picked up at Drift for Fifty Linden Friday last week. Still hoping for some skin appliers soon but this Essences skin provides a pretty good match with one of the pre-sets. You can find it at Uber, along with these amazing boots by Pure Poison. These come in 3 colours - black, grey and white - and several standard sizes as well as fitted mesh. Just watch out for those spikes!
Hope you like the LOTD =) 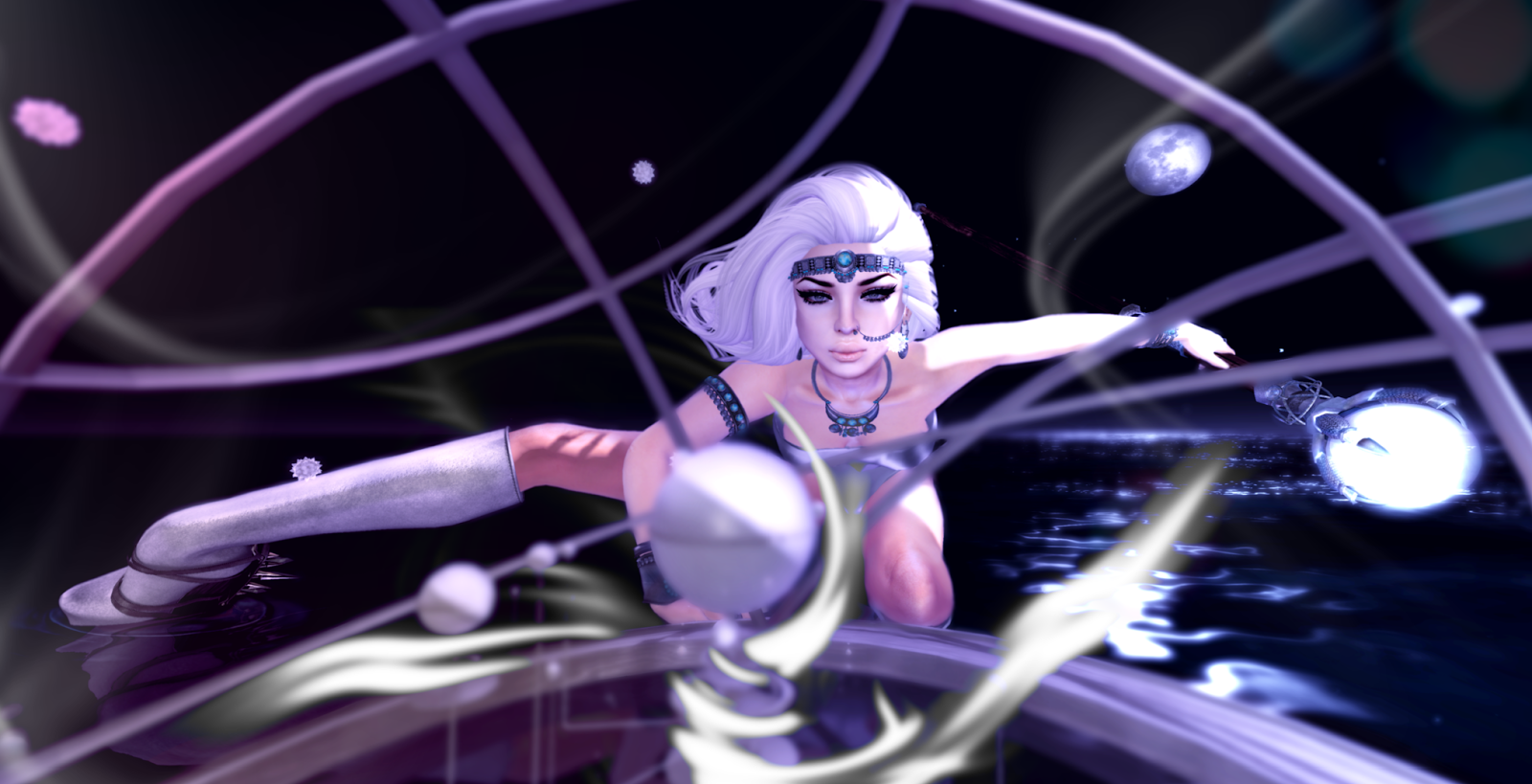 New round of The Instruments and Zibska has a fabulous new headpiece available for you!
Also, new hairs out at Tableau Vivant. They come with new colour HUDs and new pricing. There are 11 packs to choose from and each has 30 colours in it! Many of the HUDs offer streak, highlight and ombre options and then there is the basics pack with mixed 'natural' colours. 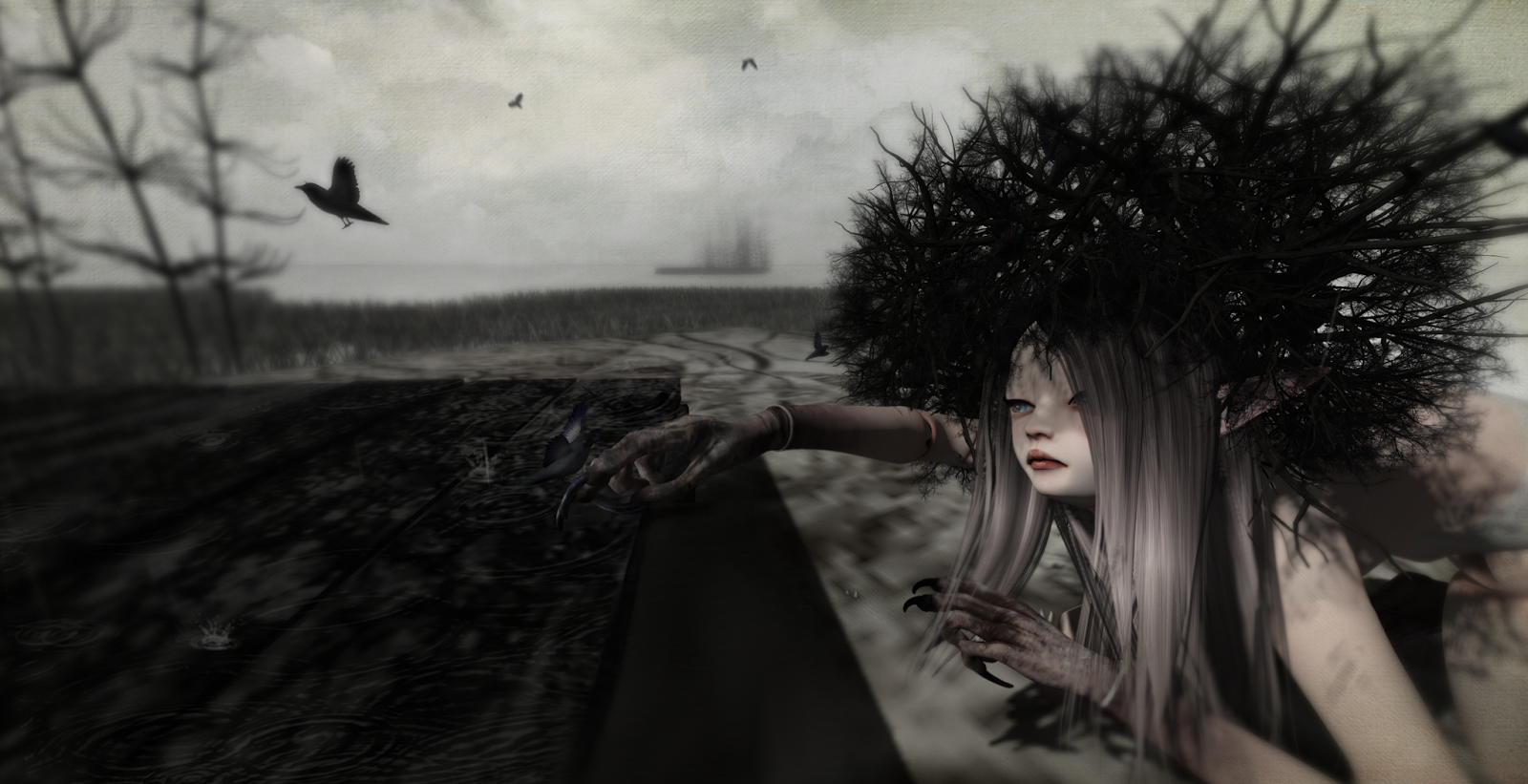 Pic was taken at H22O. This gorgeous rainy sim will be closing at the end of the month so if you haven't visited yet or want to take some more pics, make sure you get there before it's gone for good on Halloween!

hello ladies! New month... new Uber and the theme this time is 50 shades of sexy. But as I was getting all sexied up... I was finding it a little hard to say goodbye to the steampunk with the end of A Clockwork Spiral and there was some stuff I still wanted to work with (I think it will be available in store now or soon, I'm not being that much of a tease!)
I love this corset by =Zenith= cos its all sexy and classy at the same time. There are a few colours to choose from and the detail is amazing. Pick it up at Uber, along with this beautiful new skin by Essences.

Truth has more new hair goodness out, cos who knows we can never have enough hair... I mean that literally, there's no such thing as too much! This long style has pretty bands and braids at the back.

I sooo adore these new candle lights by 8f8. You'll find them at the Candy Fair which opens 3rd Oct. There are 4 colours to choose from or you can opt for the fatpack (totally worth it imo!). In each colour there are 2 versions - hanging and table version.
I'm also loving the masks by !deviousMind from last month's Secret Affair. I'm wearing one of the rares here but they are all so gorgeous, you really can't lose with this gacha. Plus, the feathers are colour-changeable on them all via the drop down menu.