Bite My Shiny Metal A**

OK, so I had to steal the Futurama quote - but only because Azoury has released these supercute 'Bender' headphones new at their mainstore! Who knew Bender could be so cute?! 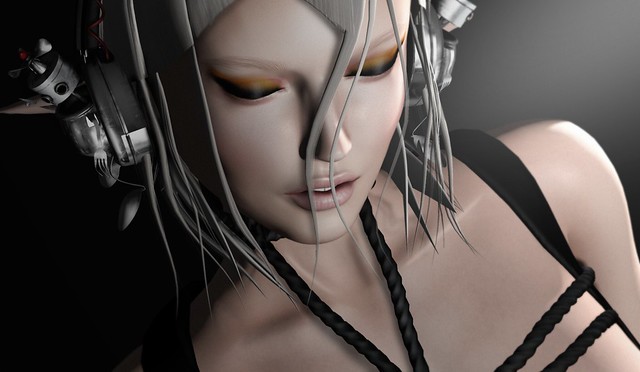 I'm also wearing new very cool hair by .Shi, available at Second Life's annual Hair Fair 2016, currently in progress! A percentage of proceeds from all hair sales at this event go to support the Wigs for Kids charity.
The skin applier is new by Glam Affair especially for LAQ Trinity mesh head. It's called 'Meredith' and is available as a gacha at Kustom9. The gacha includes 14 commons, consisting of varying makeups in 7 different skin tones. There are also 3 rares - a freckled Jamaica tone with 'clean' skin, a freckled Jamaica with makeup and a 'clean' Asia skin. 4 different eye-brow colours are included as well as a no brow option.
The clean rare skins are awesome for wearing with other makeups, including this cool new eye makeup by Zibska that is available at the new round of Shiny Shabby. The 'Cacia' eye makeup pack includes 18 colours in tattoo layers, Lelutka & Omega and unisex TMP installer.