So I was way overdue in doing a pic with my awesome friend Luzi and finally after a very special party last night we got around to it!
I've been in Second Life 5 years now (as of 1 week ago) and we met and became friends on my first day inworld - yep she rescued me from noobdom. Anyway, we were having another anniversary of sorts as we do a set every Saturday 4-6pm at Club Zero (shameless promotion here I know :P) and this week marked a year of doing that. So we had awesome party times! A huge thanks to everyone who came out last night to hang with us!

And we thought we looked damn hawt so did this pic after the set. 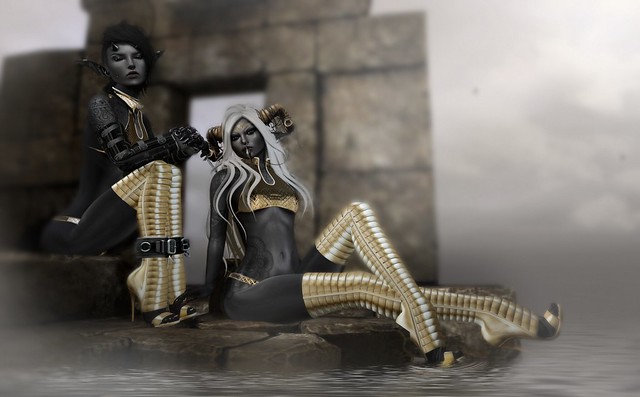 We Love Roleplay is about to come to an end for this month so hurry over for your last chance at the discounted items! You can see the skin also in my previous post.
The outfit is made to fit Maitreya Lara, SLink Physique and SLink Hourglass. There are a bunch of colours available for only 88L each at Collabor88.
The fabulous boots by N-Core come in 3 different metallic colours, with each pack including a HUD to switch the boots between 3 lengths - thigh, knee or ankle.
I'm terrible and forgot to make a note of which poses were used but I'm fairly sure they are both by Bauhaus Movement >.<