So, it's been a few days since my last post and I've got back into my own skin again so to speak. Well my own shape anyway (the skin is actually Glam Affair). It's the first time in weeks I haven't been wearing a mesh head and as much as I have liked using them, I have missed my own face too!
I've been enjoying some more of the awesome items from the current round of We Love Roleplay. This sexy new faux dread hair by Tableau Vivant has become a new firm favourite. It comes in the frizzy chic line of colour huds and is unisex. I'm so glad that there are more and more styles in these colour textures because I really like them and they have such a natural appearance, which is helped along even more so by the odd wispy strands in this style.
Also at the June round of WLRP, MiaMai presents these chic new boots which are the perfect combination of armour/roleplay looking and modern elegance. After all, every warrior type girl needs some fashionable heels too, right?! There are 4 different colours available.
Today's set is by 22769 ~ [bauwerk]. Their items can be purchased as a complete set (which also includes shelters and barrels not shown) or as separate items. The guard tower makes a perfect addition to castles and fantasy sims, with realistic stonework and circling staircase. The banner in the background is mod and you can set it up to fly your own flag/colours if you choose! And the chests, well they contain the treasure which my triumph won for me today ;) lol
All items at WLRP are discounted by 25-50% for the duration of the event, so always good to snag them now rather than later!

For anyone who has been waiting on the lag dying down to get into The Arcade, you should be fine now. Remarkable Oblivion has one of my fave gacha machines there with their 'Mercenary Guild' items. I'm wearing two of the rares today. The gloves are resize and unisex. They are super detailed and this set, the jailer set, holds the key! The weapon is scripted for all you roleplayers out there and its resize too.
Another fave machine for this June Arcade is Pixicat's 'Temptation Corsets'. I had my eye on this rare corset as soon as I saw the promo pics and fell lucky when I was playing! It comes with a HUD with 4 different colours to choose from and it's one of two rare styles, but all the commons are supersexy too!

Hope you all like the lotd and the pic! I'll be back soon with another post (and not leave so long as I have been last few weeks, eeps!) 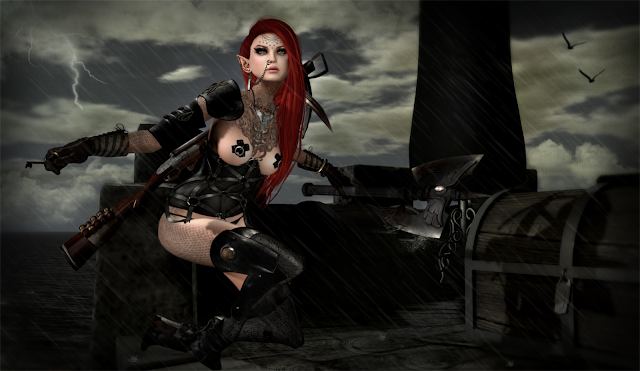 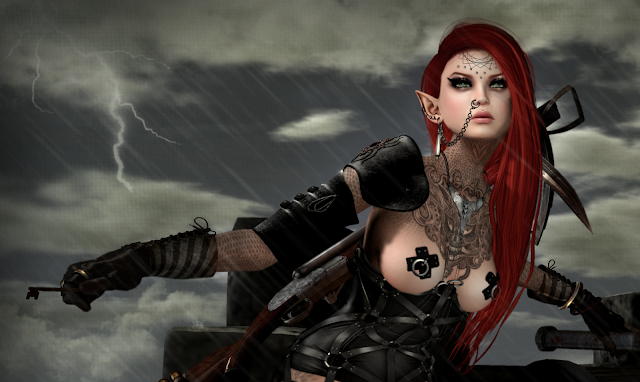 The Landmarks:
We Love Roleplay
The Arcade
.random.Matter.
Letis
Posted by Alisa Perne at Thursday, June 11, 2015