A new round of Tres Chic opens 17th Aug and Zibska has released a new jewellery set called 'Sylvana', consisting of necklace, orbit and earrings (earrings not shown). There is a colour HUD included that allows for change of the main and accent sections independently of one another.
Zibska also has an awesome gift for L'Homme Readers at the mainstore landing point called 'Flurtur Noir', which is a butterfly headpiece and matching orbit. It will be there until 31st Oct and the L'Homme Readers group is free to join so go get it!! 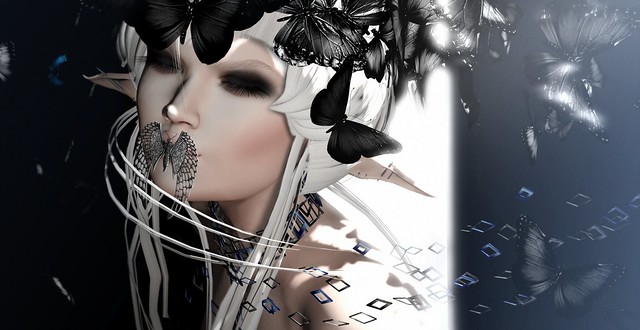 You'll find this intriguing mouthpiece by Azoury at The Chapter Four (it also comes with earrings). Get it before 20th August for the discounted price of 144L$ before it goes to mainstore at 289L$.

I'm loving this new hair style by .Shi, it's at the current round of The Crossroads. It's an edgy style, with a cool cut and long wispy wind-blown sections.