The December round of We Love RP is here! Full of fantasy goodies for your Second Life and some gifties around the tree's too for WLRP group members ;)
Glam Affair has released some more appliers for Logo mesh heads in one of my favourite skin tones - Polar! There are 5 new make-ups for the Sia Ice Queen range and all are beautiful!
Glam Affair also has some new 'deco' eyelashes at WLRP in 2 different versions and a variety of colours.

CerberusXing has released the 'Ice Nails' at the latest round of this event. There are versions included to fit Maitreya, Belleza, SLink Elegant 1 and TMP male and female. Also included are appliers for frostbitten fingers which are super cool (pun intended). However... I'm a complete douche and didn't notice the layer wasn't showing after relogging before the pic and was way too late when I did notice. So, you can't see them on the pic... but really, they're super cool silver fingers!

{anc} has created some animated and floating snow for December's WLRP as well as some ground snow versions. Available in the more standard snowy colour of white, it also comes in other fairy-like colours too! It's only just noticeable in the pic, but stunning when you see it inworld.

As always, you can find everything at WLRP discounted by 25-50%. 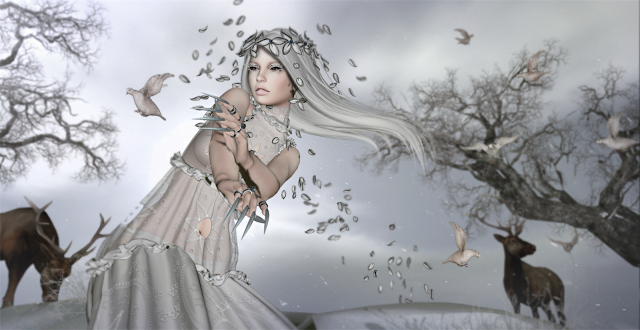 The stunning dress I'm wearing is by Dead Dollz. This is the full gown version that can be found at Winter Trend. However, you can also pick it up as a mini-dress version at WLRP. Different colours are available and it's made exclusively to fit Maitreya Lara mesh body. I love love love the details in the texture of this dress and adore the sheer top half! Sooo gorgeous!

The hair I'm wearing is by Tableau Vivant is the rare in their 'Starry Night' collection at The Arcade. There are 3 packs of the rare available, each containing 2 colour HUDs. I love this hair for the purpose of pictures but what makes its especially lovely is the 'blowing' animation for those wintry days outdoors in SL ;) 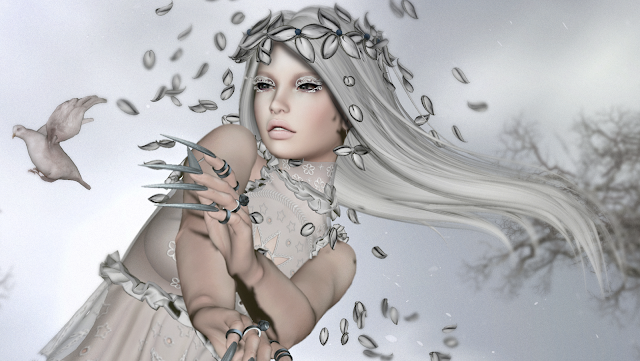 Pose by Del May