The 2017 Fantasy Faire is here!
This wonderful event brings 15 beautifully crafted sims full of fantasy and roleplay styled creations, many of which generously donate to Relay for Life and benefit the American Cancer Society. Read more about the Faire and it's cause here.

Now, in traditional Faire spirit, it's time for a story...
(scroll to bottom for main picture credits) 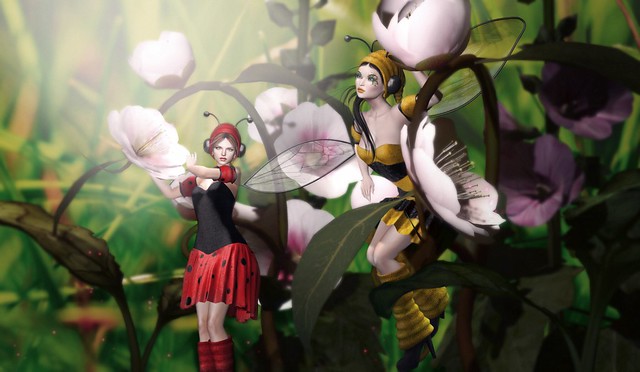 Once upon a time, in a land called The Hill, Bumblebee and Ladybug sat amongst the flowers.
Bumblebee decided it was too nice a day to sit still, she wanted to explore. She'd heard music in the distance and wanted to find out what the world offered outside of her meadow hills. So, with a wave and farewell to Ladybug, off she flew from the land she knew.

The flight took Bumblebee to peaceful town, full of colourful trees and blossom on the breeze. Dawn's Promise was it's name, with it's grand buildings fallen somewhat into disrepair but with new life emerging everywhere from the glistening water springs.

On and on the Bumblebee flew towards the fine buildings and glorious gardens in the distance. To The Rose.


Up and up Bumblebee flew, past splendid balconies and illustrious buildings to the garden above. There she met and rested by a Lion, whom carried an important message.

"...It is the courage to continue that counts", Bumblebee read.
She had not succeeded in finding the music yet, but she would be courageous and carry on her journey.

So away Bumblebee flew, back onto the current of the breeze to see where it would take her next.

The skies grew dark as the landscape changed, shadows gathering around Bumblebee. Was that a note of a song she heard?

"This is Morbus", the shadows whispered, as Bumblebee took in the dark landscape of thorns and chaos.
"Answers come to those who seek them out, those who wish to take on The Quest", the shadows continued.

But Bumblebee was already on her own quest, and again she took flight and found a place unlike any she had seen before.

Amongst the rubble and ruin, the chaos and burned-out fires, Bumblebee watched the few who remained in the city. She followed them through the alleyways of this concrete jungle, reading many of the messages that had been left behind.

San Mora was the name of the place, Bumblebee discovered. A pharmaceutical capitol quarantined at the outbreak of a deadly contagion of its own making, the population was left to survive the best they could.

This could not be the source of the beautiful music Bumblebee had heard.
She had to escape this forlorn looking place and fast...

At last she found the road out of town, she flew towards the light and into the setting sun.

Bumblebee took a deep breath and smelled flowers and blossom on the breeze once again.
The music grew louder as Bumblebee approached the sanctuary of Kakushi Pasu.
All around her lanterns danced, water flowed and Faire-goers celebrated.

Bumblebee had found the home of Faireland parties and the Literary Festival.
Bumble watched on as people danced and performed, but soon grew wary as she realised she had been out all day and dusk was fast approaching.

Bumble flew up to the highest lookout point, dancing around the glitter and blossoms.
And there in the distance she spotted her home.

With a smile on her face, she flew to The Hill. 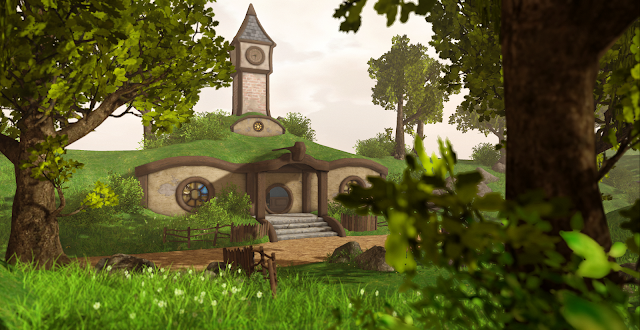 Unlike Bumblebee, you can check out the full calendar of events taking place in the Fairelands over the next 10 days here.

A big thank you to Kynne Llewellyn, who starred as the Ladybug in the top pic! You can see her version of the picture here.
Kynne also took an amazing close-up of me on set, check it out here for a closer look at Glam Affair's 'Bloom' makeup.

Both Kynne and I are wearing dresses, sleeves, boots, wings and hats by Poets Heart, called 'Insecta', which can be found at *The Fantasy Faire*.
There are several versions of this very cute outfit and the 'Bumblebee' and 'Dragonfly' colours both support RFL.