We're Only Humans After All

I'm totally loving the '8 bits' collection by Bauhaus Movement, which can be found at the current round of Shiny Shabby. All of these accessories are unisex and it's awesome there is finally a hood that doesn't cause a million problems with hair choice lol. The hood had 4 colour options available, as well as a fatpack, and each includes 3 size options each for male and female. There are 4 versions of the mask available and the black one I'm wearing allows for the metal choice between silver, gold and bronze. Coordinating versions of the necklace are also available.

This fabulous mechanical arm is by [The Forge] and is also a unisex item. There are both black and steel versions available, each coming in male and female fits. The arms consist of 2 parts - upper and lower - which can be repositioned to your needs. You'll find these at The Men's Department.
The very ominous looking bat I'm carrying is also by [The Forge] and is a release at We Love Roleplay! That means you'll have to hurry on over there to pick it up at the discounted price before the end of the month ;)

Fantasy Gacha Carnival is still open and my slightly more futuristic weapons of the gun and staff are by May's Soul for their Star Wars inspired 'Empire' gacha. 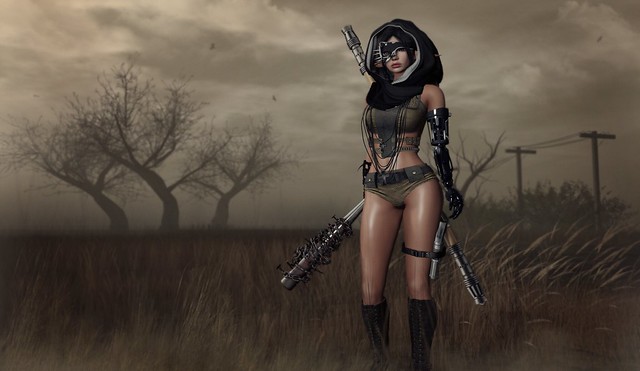 Pose by Del May - Grown Up